One of my favorite things about having a business is that making small changes can lead to big jumps in profit.

In this article I’m going to share how you can save thousands of dollars every year by simply setting your business up to be taxed as an S corp.

That’s not an exaggeration. This is one of the easiest ways to put more money in your pocket every year.

This will only take a few hours to implement, and it will pay large dividends for years to come.

Sound too good to be true?

Disclaimer: This article is for educational purposes only. I am not a financial professional of any kind and am not qualified to give financial advice. Seek professional council when making important business and financial decisions.

There are several advantages of filing as an S corp, but there is one main benefit that stands above the rest…

…It can save you boatloads of cash on your taxes. (As I’ve already mentioned)

Here’s how it works.

As a self-employed business owner, you probably already know that you have some extra tax responsibilities that you didn’t have as an employee, the biggest one being Self-Employment Tax (aka SE Tax).

Just to clarify, Net Earnings is what you get when you subtract your expenses from your Gross Revenue. You can think of it as your profit BEFORE paying yourself.

So let’s say that you are a self-employed handyman who formed your business as an LLC. You work by yourself and have no employees. This year your business generated $150,000 in revenue and you had $50,000 in expenses (tools, gas, insurance, materials, etc.). That means your Net Earnings were a clean $100,000, which means you would pay about $15,300 in Self-Employment Taxes.

Here’s a quick breakdown for an LLC:

$15,300 is a lot of money to pay in taxes, especially considering that you still have to pay Federal Income Tax on a good portion of what’s left over.

Now, let’s say this year you got smart (or just read this article), and decided to take a few hours to request that the IRS treats you as an S corp.

You’ll have to jump through a few hoops to get it setup, but it only takes you about six hours total since your bookkeeper or accountant can help you with the process.

Now, let’s say that next year you make exactly the same amount that you made this year, except this time you have elected to be taxed as an S corp (smart move).

Here’s a breakdown of how SE Tax works for an S corp:

That is not a typo. You could save over $9,000 per year in taxes by simply knowing what to do and then jumping through a few hoops to be considered an S corp.

This is because as an S corp, you only have to pay Self-Employment taxes on your salary. The rest is considered profit that you can pay yourself through shareholder distributions (a fancy name for paying yourself SE Tax-free).

Before we get too excited let’s talk about…

The Downside of Filing as an S Corp

Of course, things are never really that easy, and as I mentioned earlier, you will have to jump through a few hoops.

This might seem overwhelming at first, but it’s all pretty simple as long as you have an accountant or a bookkeeper who knows what they are doing to help you out. I worked closely with my bookkeeper to get it all setup, and all I paid was $150 for the initial setup.

Yes it is work, but it’s well worth the effort as you’ll see below.

How much would you save if you elected S corp status?

At this point you’re probably wondering…”Is this really worth the effort?”

In most cases, the answer is yes, it is definitely worth it, especially as your profits grow.

But I don’t want you to take my word for it. Take a look at the table below to help you estimate how much you could expect to save by electing S corp status for your business. 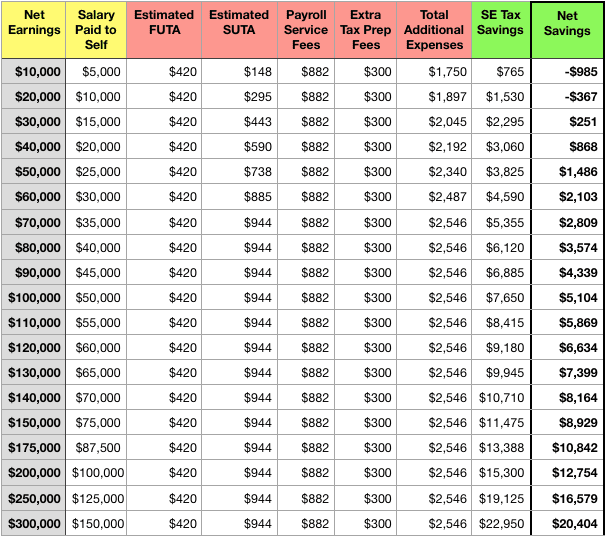 *The salary’s listed are not necessarily representative of a reasonable salary. That must be determined by you, the business owner.

Let’s examine the table above for a second.

On the left, you have your Net Earnings which I explained above. That is basically your profit before paying yourself.

Next you have the “Salary Paid to Self” column which should be self explanatory – it’s the salary that you decided was a reasonable salary to pay yourself. Now if you’ve been paying close attention so far, you’re probably thinking…“Hey, why don’t I just pay myself a ridiculously low salary (like say $10K per year) so I pay even less SE Tax?” Well, as you may have guessed, the government would frown upon that and you would risk owing lots of money later in back taxes. So you want to figure out a reasonable salary given your job description. In the table above, I just set the salary as 50% of the Net Earnings. That is not for any reason other than to create this example table.

Next in the table, you have the red columns, which are the additional taxes and expenses that you may have as a result of managing an S corp, with the furthest right red column being a total of all of these. Of course, these taxes and expenses may be lower or higher for you, but the table should give you a good estimation.

Then you have the green columns. The one on the left is how much you’ll save on Self-Employment taxes based on the other numbers in any given row. The very right column is the Net Savings, which is how much extra money you can expect to put directly in your pocket (before federal income taxes) as a result of electing S corp status.

As you can see on the table, as long as you are making $15,000 in profit above what you pay yourself as a salary, having an S corp will lead to a net positive. And, the higher your profits are after paying your salary, the more money you will save by electing S corp status.

Setting Up an S Corp

Actually, you don’t “set up an S corp” because it’s not technically a business entity like a C corp or an LLC is. Instead, you simply elect that your LLC or C corp be taxed as an S corp. It’s basically just a way to be taxed.

So first, you need to form your business as either an LLC or as a C corp. So if you haven’t done that, that’s where you’ll want to start. For most handyman businesses or self employed people, an LLC is the best choice, but that should ultimately be determined by you and a knowledgable accountant. I’m not an accounting professional.

Then, you fill out a few forms for the IRS. Which forms you submit will depend on your situation. Here are the forms you’ll need if you have an LLC:

Honestly, all of this can get pretty confusing which is why I strongly recommend getting help from your accountant or a knowledgable bookkeeper. I recommend finding somebody who you will pay to manage your payroll, and have them help you get setup since they will benefit financially from doing so.

Time is Of the Essence!

There is one more important thing to know. If you want to elect S corp status, then now is the time to do it (before the end of the year). That’s because there is a deadline at the end of the year. If you miss it, you’ll have to wait another whole year and continue overpaying in taxes.

Also, you can’t elect S corp status for the current year. It starts the year AFTER you submit your paperwork and get approved. So you unfortunately won’t be able to save on 2019 taxes, but if you set it up now you will be able to save on 2020 taxes and in future years.

And finally, if you are just starting your business and feel overwhelmed, this is something that you can put on the back-burner. Don’t allow this minutia to stop your progress. You have bigger fish to fry like simply getting started. Just start out forming an LLC and you can tackle this problem when you have the time.

Check out my $100K Handyman Pricing course. You’ll get in-depth videos packed with tips and tricks to boost your income, save time, and run a more enjoyable business.

How To , Quick Tips

The Future of the Handyman Business

I don’t know of a better time in history to be a professional handyman or contractor. Our economy is growing. Our soc...
Read More