The Unfortunate Truth: What It REALLY Takes To Quit Your Job

Five years ago I quit my engineering job to start a business. Just like millions of employees across the world, I hated my job. The only difference between them and I is that I actually took the leap.

And you know what? It was the best decision of my life. Not only do I have ten times as much freedom as a result, it was an exhilarating experience to actually quit my job. It made me feel alive.

It was fun to tell my boss I quit and people gave me tons of respect.

To this day, whenever I tell somebody the story of me quitting, they’ll say something like “Wow, that’s really admirable. Most people would just stay and be unhappy for their whole lives. You actually did something about it.”

And when I hear this stuff, my ego expands. People give me all kinds of respect and it feels great – like I’m some ultra confident risk taker or something.

But I have a confession to make – that’s not the whole story.

In fact, if you were in my shoes, you’d probably do the same thing without hesitation. I’ll tell you why in a minute, but first let’s talk about…

What It Takes To Make Bold Moves (Like Quitting Your Job)

I think it was in a Tony Robbin’s book where I first learned the concept that human behavior can pretty much be boiled down to two things – avoiding pain and seeking pleasure, with avoiding pain being the stronger influence of the two.

Of course it’s not always that binary. Sometimes things that bring pleasure also bring pain. Drinking copious amounts of booze is a good example. It feels great at the party, but the next day sucks.

And some actions that are painful bring lots of future pleasure. Exercise is a good example. It might be painful to do heavy back-squats, but you’ll be rewarded with the strength and health later.

When something is both painful and pleasurable, then we make a judgement call about whether or not the pros outweigh the cons, usually on a subconscious, emotional level. This is rarely a rational decision which is why people skip workouts and drink too much all the time.

Even altruistic acts like donating to charity or volunteering fall under this paradigm. If you care about a cause enough to donate your hard earned cash, that’s probably because it actually pains you to see suffering, even to the point where giving away your money makes you feel better. Or, maybe you feel guilty (pain) or just want recognition (pleasure).

In the case of quitting your job (assuming you hate it), you are faced with one of these pain/pleasure dilemmas. You have one painful option – which is to stay at your current job. Then you have another painful option which is to quit your job. This would be great and bring all kinds of pleasure, except the whole fear of the unknown thing.

What if you fail and you’re worse off because of it?

Fear of the unknown almost always overpowers the pain of staying in a job you hate. The small possibility that things could get worse will paralyze most people.

But in some cases like mine, the pain of staying finally overcomes the fear of the unknown and shifts the decision to quitting.

It’s kind of like jumping off a 50′ cliff into a deep lake. That’s just high enough to scare you, but not high enough to hurt you (unless you do a belly flop). Most people won’t jump. But, introduce a hungry lion to the scenario backing you off the cliff, and suddenly they become really fond of taking that leap.

It often takes being backed against to wall for bravery to emerge. Which leads me to…

…The Real Reason I Quit My Job

The truth is that I wanted to quit my job long before I actually did, but the fear of the unknown kept me pinned down.

..until things got worse.

First, I discovered that my house, which I just remodeled had $30,000 of water damage in the crawl space (which insurance wouldn’t cover since it was a pre-existing condition).

Next, my physical health took a nosedive. I don’t know if it was the stress, my diet, or sitting in a desk all day, but I just started getting injured easily.

I’d play basketball and both knees would hurt for weeks. I’d try going for a jog and my ankles would develop tendonitis. I even somehow developed tendonitis in both wrists, making it challenging to type or use a mouse. Since I worked at a desk job, this was a real problem.

At one point, I had chronic pain in both ankles, both knees, both shoulders, and both wrists!

As a result of not being able to play basketball, run, jump, or even play the guitar without experiencing pain, I started getting depressed.

All of these things kept piling on, and I felt like the only escape was to quit my job. I wasn’t sure what I was going to do when I quit, but anything looked better than my current situation – even the unknown.

Only at the point where staying in that job finally became more painful than giving up my income was I able to finally quit.

It wasn’t confidence or courage. I quit because I had to. It was a simple pain avoidance move, as basic as removing your hand from a hot stove.

And the reason I’m sharing this is because I believe there’s a valuable lesson here, especially if you want to escape your day job.

Assuming this pain/pleasure dynamic is what actually controls our decisions, there are only two ways you’ll ever escape that job.

#1 – Your current situation becomes much worse (like mine did)

Since we already know you aren’t going to choose option #1, that really only leaves you with one option: to make the idea of quitting less scary.

So how do we do that?

One way would be for me to try and convince you, but based on experience, it’s hard to talk fear out of people. Plus, in some cases that fear is for good reason, like if you have a family to support.

A more effective way would be to find a better job, or my favorite, start a business on the side.

When you have a side income of $1,000 per month or more and you know you can scale it up with more time, leaving your job becomes less risky. You now have a clear path, and fewer unknowns.

So, that leaves me with a question for you…What would have to happen for you to leave your job? Would you need to own a profitable side business? Have a new job lined up? A million dollars in cash under your mattress?

Leave a comment below letting me know. I’d love to hear from you.

P.S.
Want to learn how to turn your skills into a reliable side income – that you can scale into a full time income?

Check out my all new handyman business startup guide… 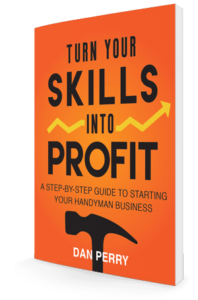 You’ll learn my proven step-by-step system for starting a profitable side business – and how to scale it up to replace your day job.