What A Window Installer Taught Me About Pricing My Services 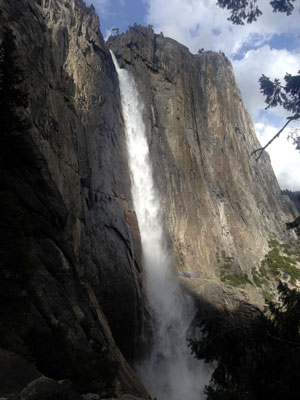 Last spring I took a camping trip to Yosemite National Park, which was probably the coolest place I’ve ever been.

While hiking to the top of Yosemite Falls, I came across a guy who owned a window installation company in Washington State. Let’s call him Cliff for the sake of this story.

I always try to learn from other contractors so I took this opportunity to ask Cliff some questions about his business.

I was immediately hooked. Here was somebody I could learn from.  He had thirty years of window contracting experience with fifteen years as the business owner.

I was drawn to Cliff’s confidence as well as his level of experience. You could tell he had stuff figured out. The fact that he was in Yosemite with his family gave him points in my book. Plus he was a beast hiking up the trail.

At the time, I was struggling with pricing my services and always questioning whether I was too cheap or too expensive. So as I followed him up the steep mountain trail, I asked him how he determined his pricing.

He was passionate about this topic so I knew I’d stumbled up gold. I could hear the hard lessons he’d learned through the way he was speaking, as if he had found the truth about pricing. His certainty drew me in.

Here’s what he said, although not the exact wording.

“I took a look at my business and the service I wanted to provide and I figured out how much I needed to charge in order to offer that level of service. I wanted to do good work with high profit margins, so I ignored what everyone else was doing.

I don’t care how much others charge and don’t try to compete on price. I know what I need to charge in order to run my business and provide a good service. Most window contractors will quote based on piecework. They’ll quote by the window and try to have the lowest price. I don’t do this. Instead, I take a look at the job, figure out how many guys I need for how many days, and simply charge $750 per day per guy. Then, I add in the cost of the windows and mark them up 35%.

There’s just so much that varies with window installations such as siding, difficulty of access, and size of windows. If you don’t charge enough, you end up rushing and not doing a good job. So I make sure to charge enough to do good work every time and so I’m able hire the right employees.”

I thought that $750 per guy per day was expensive. Plus, 35% is a big markup on materials. I figured that he must have had a sweet connection with this window supplier to be able to mark them up that much.

Nope, not the case.

He explained that you or I can go to Home Depot or Lowe’s and buy windows for essentially what he pays for them. But it didn’t matter to him, in order to run his business how he needed to, he had to mark up materials by 35%.

Cliff’s method of pricing fascinated me because he wasn’t competing on price like other window installers. Instead, he set his pricing up so that it allowed him to provide the level of service his ideal customers were looking for.

Despite being 20% more expensive than his competitors, he was booked out 2 months while watching others go out of business. Charging more allowed him to pay his employees well, encouraging them to stick around and work hard.

It’s clear that Cliff’s pricing strategy works for him. It also demonstrates some powerful pricing concepts.

Services Are NOT a Commodity

Just because your competitors are cheap, doesn’t mean you need to be. Instead, it’s typically better to differentiate yourself by offering a better service, a faster service, or doing something else that’s unique and valuable to your ideal customers.

Cliff was booked solid and received many referrals despite being significantly more expensive. His customers are glad to pay him more because they knew what they were going to get. Not only where they getting a quality installation, they got the peace of mind that came with Cliff’s excellent reputation and service.

Make It Worth Your Time

Home service pros will often price their services based on what they would be willing to pay, which is usually much less than a non-skilled homeowner would be willing to pay. However, handymen tend to be more frugal and would rarely pay a professional rate for somebody else to work on their homes. They’d rather do the work themselves. Yet, they price their services like everyone thinks like they do.

If you aren’t making enough money to justify the amount of time and effort you are putting into your business, then what’s the point of being in business? You might as well do something else or go get a job.

Cliff’s story is a great example of how to price your services as a window installation company. It’s also a great example of how countless other home service pros have found success with pricing. They charge a rate that allows them generate a healthy profit and stay in business, then they back it up with a high quality service that customers love.

If you found this helpful and want to learn more about how to price your services for maximum profit while keeping your customers happier than ever, then watch this video on pricing your services. You’ll learn five common reasons that pros undercharge and what to do about it.