How to Install Low-Profile LED Lights in Your Kitchen

I’ve tackled several kitchen projects over the years, but I’ve never made such a major improvement with so little time and money. I spent less than $350 and just four hours brightening our kitchen. My original intent was strictly practical: I just wanted better light to make food prep and cleanup easier. But replacing the single fixture with bright LEDs transformed the room, surprising me and amazing our guests.

LOW-PROFILE LEDs MADE IT EASY

Initially, I thought I’d install recessed can lights for a sleek look and lots of light. Then, I ran across these ultra-slim Halo LEDs by Eaton ($30 each). These LED lights are super bright (900 lumens) and have such a low profile (less than 1/2 in.) that you can even locate them directly under a joist if needed. They’re rated for insulation contact and wet locations, so you can use them in a shower or even outdoors. A switch on the side of the box lets you adjust the color temperature. They’re also dimmable.

All you need is a power supply, a means to cut round holes, 14-2 NM-B cable, basic electrical tools and a drill. The transformer box converts 120V to low voltage, and it’s UL-listed as a junction box with room for power in and power out. That lets you take power from the first box and string together as many lights as you want. You might need to fish wire, but aside from that, installation is easy. Several companies make a similar product, but this was in stock at the local home center.

If you have an attic above, you can access the joists from there instead of working from below as I did. That simplifies fishing wires, but you’ll still have to dig through insulation. Before starting the job, remove the ceiling fixture and look inside the junction box. My box had just one incoming cable. If your box contains more cables, wiring will be a bit more complicated. You may need to install a second junction box because the box for these LED fixtures can house only two 14-2 cables. I replaced the existing fixture with an LED like all the others.

If you want a standard fixture in the center of your ceiling, you’ll still have to remove the existing junction box (Photo 2) to access the joists. Then, after installing the new lights, install a remodeling box in the same hole. I found everything I needed at a home center. Two special tools made the project much easier: an adjustable drywall circle cutter ($30) and a 54-in. flexible drill bit ($50).

Lay out the new light locations 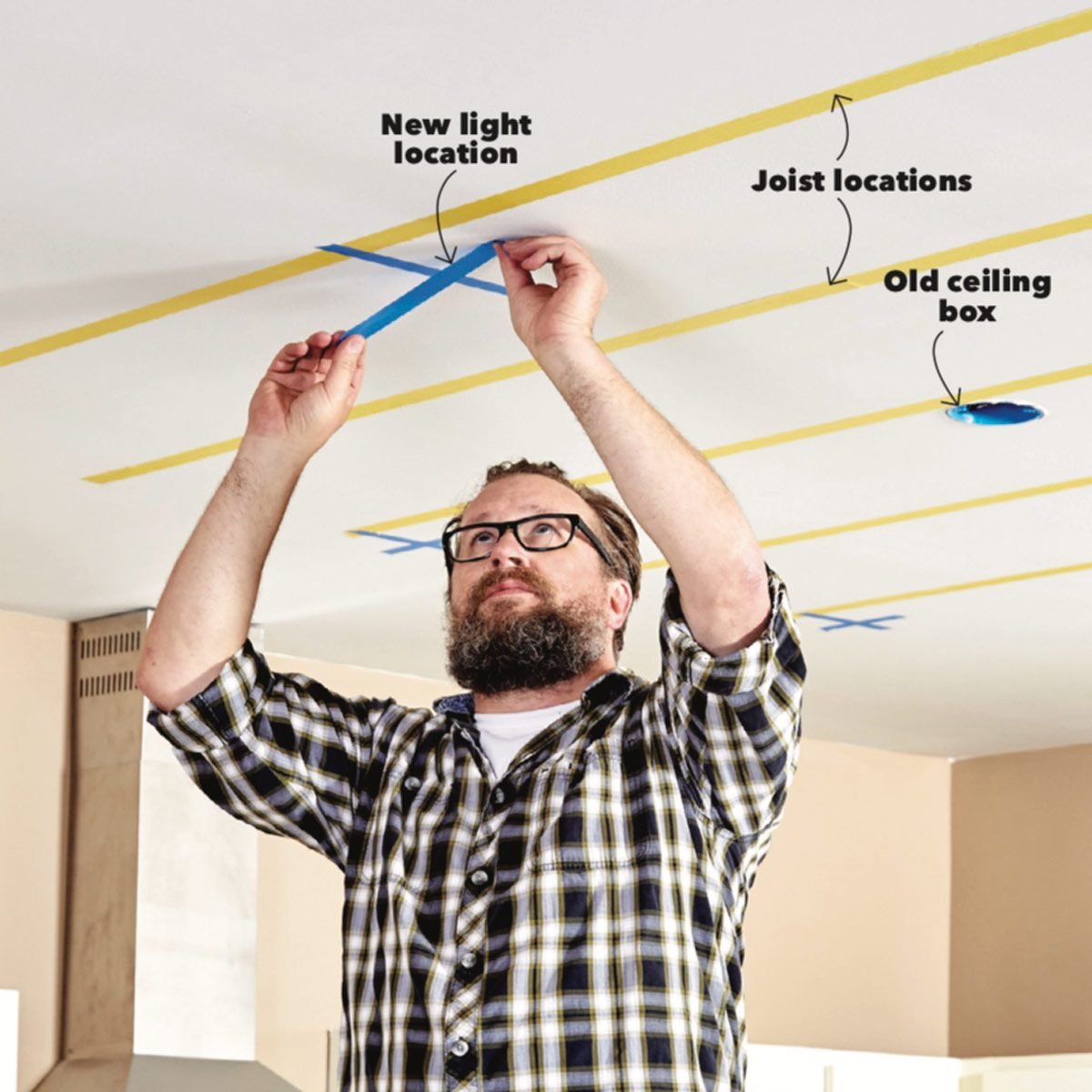 Mark all the joists involved in the installation using strips of tape. Then mark the location for each new light with tape. The lights can go anywhere, but I kept them close to the joists to get better access for attaching the transformer boxes to the joists.